The founder and chairman of leading business support solutions company, Mount Charles has been recognised with a lifetime achievement award at the prestigious Belfast Chamber Awards.  The awards seek to reward all areas of business in all sectors, in Belfast and took place on Friday 22nd October 2021, at the Crowne Plaza Hotel, Shaw’s Bridge.  Trevor was chosen by the judging panel for his celebrated contribution to business life in Northern Ireland.

An EY Entrepreneur of the Year finalist in 2017, Trevor has collected numerous awards on behalf of his company and has been the recipient of an Outstanding Contribution award at the 2016 Janus Awards and the Lifetime Achievement Award in 2018, at the Aer Lingus Take Off Foundation Business Awards. Mount Charles Group, Northern Ireland’s largest independent catering and business support services provider, was founded by Trevor in 1988, and has since established itself as the leader in contract and retail catering, cleaning, vending and security services.

Citing Trevor’s achievements Simon Hamilton, Chief Executive of Belfast Chamber said: “His story is one, quite simply, of three decades of business success.  “Mount Charles is an innovator developing new products, services and brands that supports some of the biggest and best-known businesses, sporting venues educational facilities and healthcare organisations in Northern Ireland and further afield.”

Mount Charles currently sources approximately 85% of its food from NI suppliers, attributing to a contribution of £50 million per annum to the NI economy. The company has recently announced a new addition to its portfolio of service offerings, Craft Event Co., which will specialise in weddings and corporate functions

Upon receipt of his award, Trevor Annon said: “To be honoured by my hometown Chamber is a wonderful achievement and it reflects the results of 33 years of hard work.  “The Chamber President, Michael Stewart, keeps reminding me of a comment I made whilst addressing 500 local catering students – ‘at age 18 the only thing Trevor wanted to do was to join the police, but he was half an inch short of the then regulation height. So, he became a Caterer by default. Would Mount Charles have been created if he had been half an inch taller?’.”

As well as building his family business, Trevor has also served as Chair of the crime fighting charity Crimestoppers for 12 years, was an independent Board member of the Irish Football Association and until recently was the Chair of the National Football Stadium in Belfast where he spearheaded the development their new world class stadium.

In closing his speech Trevor mentioned a framed gift he had received from his wife on his last birthday. It contained two lines of poetry from their favourite poet, which reflected the journey Trevor and many other entrepreneurs have endured through the pandemic. Quoting Seamus Heaney, he concluded, “If we can winter this one out, we can summer anywhere.” 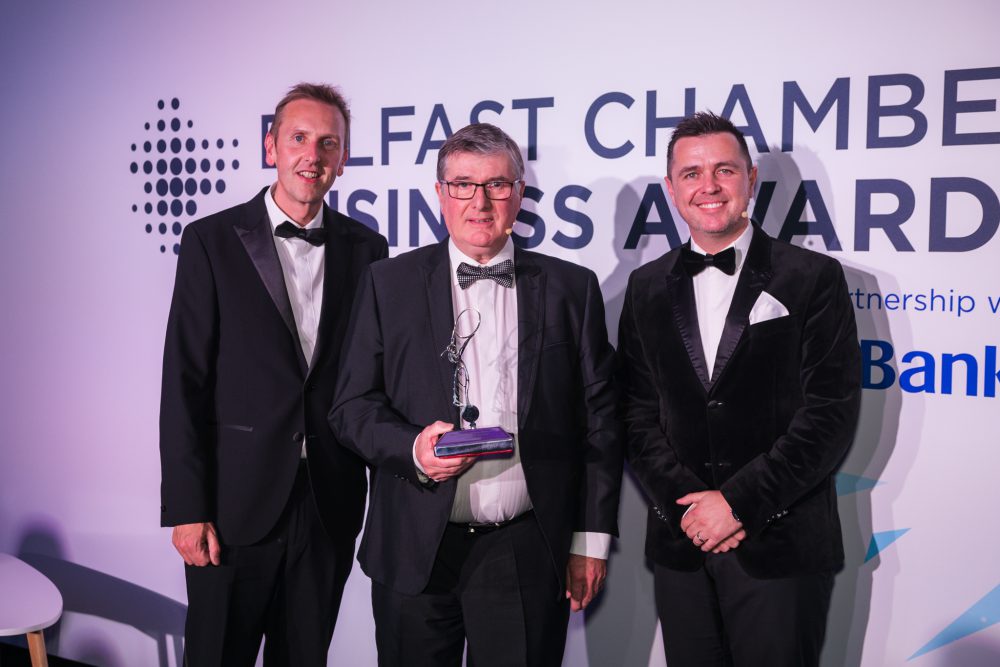